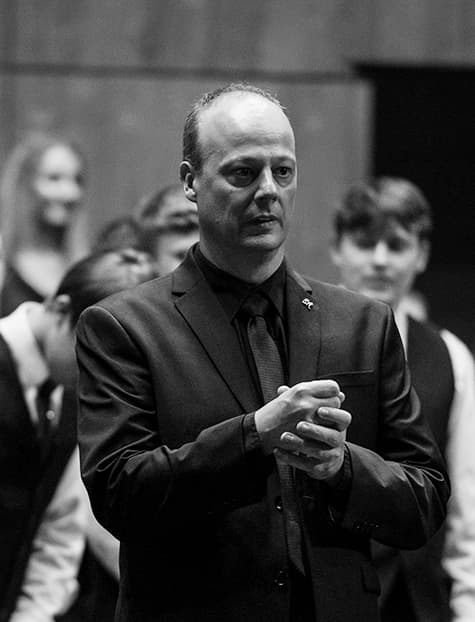 Mat started his choral education through a successful audition to WakefieldCathedral Choir aged 8 years old, and was awarded a full music scholarship toQueen Elizabeth Grammar School and was a talented violinist. He was a CathedralChorister for 8 years from the age of 7 years old taking part in a busy programme of weekly events and tours abroad. He studied at Colchester Institute and Bretton Hall College, before going on to complete a PGCE in Music Education where he was awarded a commendation.

Mat is passionate about education has worked in the sector for over 20 years. He was recognised as an outstanding teacher (AST) early in his career and has worked in a variety of roles in Barnsley schools including as a Vice Principal,Advisory Teacher and, most recently, as a Regional Director of Education for Astrea Academy Trust. He has been a guest lecturer at colleges and universities, has delivered national conferences and his teaching has been used as an exemplar for schools across England and Wales in government publications.

Mat, Eleanor Wright and Keith Norton established Barnsley Youth Choir in 2009.The choir now involves over 500 children from the local community, in an area of significant deprivation, formed into 7 separate choirs aged 0 – 24 year sold. BYC has developed an outstanding international reputation, winning 8 first prizes and gold medals from 9 international competitions and 3 Grand Prix including the World Choir Games 2014 (Riga), the European Choir Games 2015(Magdeburg) and the European Choir Games 2017 (Riga). BYC is currently ranked5th in the World in the Interkultur World Rankings in its category and is the highest ranked choir from Great Britain. Mat has taken Barnsley Youth Choir on numerous international tours and the choir has won a number of awards including, most notably, the Queens Award for Voluntary Service in 2017 which recognised the outstanding work that the large volunteer team is involved in.Mat also helped to establish a large adult community choir in Barnsley in 2016– Barnsley Singers.

Asa member of the international jury, Mat has worked in some of the most important competitions in the world including the World Choir Games in Sochi, Russia (2016) and Pretoria, South Africa (2018) and the Virtual World ChoirGames in Indonesia (2021). He has worked with outstanding choirs and soloists worldwide, and is in demand internationally as a choral clinician.  He has coached choirs from all over the world, worked as a workshop leader and led evaluations in France, Sweden, Russia, South Africa and Spain as well as throughout the UK. Mat has acted as a guest conductor for choirs from this country and abroad including the Aurin and Miraculum Choirs (Hun), Tuks Camerata (RSA),Adolf Fredriks School Choirs (Swe) and choirs from the Paris Conservatoire (Fra). He has worked closely with choirs from the Kodaly School in Kecskemet, Hungary and uses this system to develop singers and choirs.

Mat has developed a reputation as a workshop leader, clinician and panellist, delivering sessions for Interkultur, NYCGB and ABCD as well as leading workshops and raining for prominent choirs throughout the UK and internationally. He is a founding member of the International Choral Conductors Federation as well as a leader for the International Choral space Academy. In 2019 Mat was appointed asa representative for Great Britain on the World Choir Council and in January2020 Mat was appointed a Member of the Order of the British Empire (MBE) for his services to young people and music in the Queen’s New Year’s Honours List.

Mat has experience of working with many different types of choirs and is passionate about supporting choirs of all ages and abilities. Whilst he is comfortable working with all genres of music, he has a reputation for arranging and performing high quality popular, gospel and spiritual music and is in demand asa composer and arranger. He specialises in engaging and inspiring those who lack confidence and experience, and his enthusiasm and energy is infectious. He is passionate about the use of singing as a mechanism to engage, connect and transform communities.